The Fifth Bureau Issue - The 1938 Presidential Series - The Prexies

The fifth series of definitive stamps produced by the Bureau of Engraving and Printing was the 1938 Presidential Series, affectionately known as the "Prexies." President Roosevelt chose to replace the 1922 regular issue, which featured Republican heroes, with a new series which would represent a broader, more united view of America by showing all the presidents, regardless of their political affiliation. The 32 values of the resulting issue included a stamp for every president, with the value of the stamp corresponding to the number of his presidency from Washington through Cleveland, the twenty-second president, plus higher values for later presidents through Coolidge. Other themes were used for the three fractional values.

The basic design for the series was established for the one cent value by an open public contest which drew 1200 entries. The winning design, by a woman commercial artist, Elaine Rawlinson, broke the tradition of classical motifs and complex ornament which had graced our stamps since 1847. A bust of Washington in profile and white lettering were placed on a plain colored background to produce an effect of  simple dignity. This concept was repeated throughout the series, producing one of the most widely admired set of stamp designs in U. S. history.

Sheet stamps were issued between 5 May and 8 December 1938, with coil and booklet stamps following in January 1939. The prexies were gradually replaced by the Liberty Series between 1954 and 1959. Although over 240 billion stamps were issued over the twenty-year life of the series, there are few varieties for the collector of mint stamps to pursue. There are some scarce plate blocks, a couple of rare color errors, an inadvertently watermarked one dollar value, and experimental electric-eye plates. Collecting plate numbers for the coil and booklet plates, which appear only on miscut examples, can provide a life-time of fun. In 1939 the Canal Zone Postal Service ordered one half and one and one half cent values overprinted "canal zone" [ed, small caps] to meet a planned increase in third class rates. These stamps are common enough, but some overprinted plate numbers are rare.

There are probably more different first day covers for the Prexies than any other U.S. issue. Between the large number of values, including the coil and booklet formats, and the extensive network of  first day cover producers that operated in the late 1930's, hundreds of combinations of values and cachets are possible. Quantities produced were often quite small, either because the producer was a small-time operator, or because the $5.00 postage for a first day cover of the Coolidge stamp was a lot of money in 1938. This is not a field for the faint of heart, but it can yield great satisfaction in an extensive collection with many potential discoveries and rarities.

Perhaps the most popular way to collect the Prexies is on commercial covers. The extensive services offered by the U.S. Post Office when the issue appeared in 1938 are reflected in many unusual frankings and uses. The challenge is enhanced by the fact that many values were released for which there was no applicable rate, and commercial uses of these values are difficult to find. The most prized examples are solo uses with a single stamp paying a correct rate or combination of rates on a small cover. The 11 cent, 14 cent, 19 cent, 22 cent, and two dollar values are particularly hard to find. No five dollar solo use paying correct postage on a letter is known. But the richness of Prexie postal history extends far beyond the pursuit of solo uses. World War II expanded the U.S. postal system around the globe in the form of Army and Navy post offices. The war also disrupted postal services worldwide, leaving many treasures for the postal historian to discover and research. After the war, many changes in postal rates further increased the diversity of Prexie postal history. Finally, there is a host of odd, erroneous, and just plain peculiar frankings resulting from the enormous amount of Prexie franked mail. These items may not be great rarities, but they add enormously to richness and enjoyment of collecting Prexie covers.

The Prexie collector is fortunate to have fine written sources to support his hobby. The "Bible" is The Prexies [ed, italics] by Roland Rustad, edited by Leonard Piszkiewicz, available from the United States Stamp Society. Another fine reference is Richard Helbock's Prexie Postal History [ed, italics], a collection of essays of different aspects of collecting Prexie covers. Tony Wawrukiewicz's books on U.S. postal rates are essential for the Prexie postal history collector. Finally the bulletin of the Prexie Era Study Group provides an on-going variety of stimulation for all types of Prexie collectors. 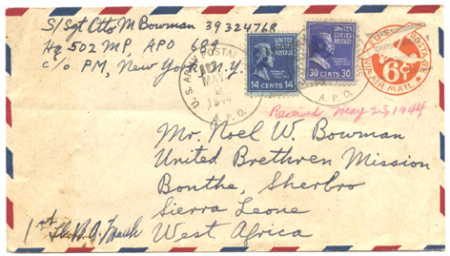