In 1946 and 1947 the 5c DC-4 Skymaster airmail stamps were issued to meet the newly reduced rate of 5c per oz. This rate was in effect from October 1, 1946 to December 31, 1948. This was the last time a domestic airmail rate of 5c was in effect for lettermail. The significance of this 5c per oz rate was the extension of the rate to U.S. Territories and Possessions. Mail from the farthest flung places like Guam to the U.S. was 5c per oz. The previous rate from Guam was 35c per 1/2 oz (70c per oz.), or a savings of 70c per oz. This step was taken to increase the volume of mail in the airmail system. Guess what, it did. The domestic rate also applied between territories and possessions. The rate was only in effect until January 1, 1949 when it increased to 6c per oz.

Anyone using APO or FPO to send mail could also use the 5c rate, however, from APO/FPO to international destinations mail was assessed same rate as if mailed from the mainland U.S.. The concessionary rate of 6c per 1/2 oz in effect since 1941 ended September 30, 1946.

On November 1, 1946 "uniform" international airmail rates were introduced. These were 10c to  Western Hemisphere, 15c to Europe, and 25c to Rest of the World. Rates were per 1/2 oz to international destinations. Stamps specific to these new rates were not issued until almost one year after the introduction of the rates. This meant that either the 5c Skymaster stamps or the discontinued Transport stamps had to be used to make up the rates.

For collectors these periods are interesting because of the relatively short duration of the rate and also for the interesting usages to various destinations that can be found. 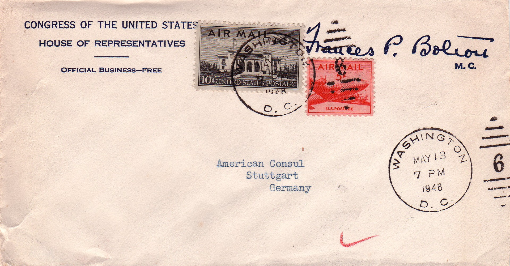